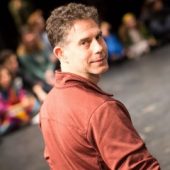 Michael Rohd is the Founding Artistic Director of Sojourn Theatre. He recently accepted a Professorship at Arizona State University’s Herberger Insititute for Design & Art, where he, Liz Lerman and Daniel Bernard Roumain lead a think tank/action space called The Ensemble Lab. He is the author of the widely translated book Theatre for Community, Conflict, and Dialogue.  He directs the Center for Performance and Civic Practice, where current projects include The Catalyst Initiative, a national program supported by The Andrew Mellon Foundation, and Learning Labs, through which he is currently collaborating with Arts Councils at the State and Local level around the US. In 2015, he received an Otto Rene Castillo Award for Political Theater and The Robert Gard Foundation Award for Excellence. He was the 2013-2016 Doris Duke Artist-in-Residence at Lookingglass Theater Company in Chicago. Recent/Current projects include leading a two-year Sojourn Artist-in-Residence collaboration with Catholic Charities USA poverty reduction sites around the US; collaborations with Steppenwolf Theater, Bush Foundation, Lincoln Center, Singapore Drama Educators Association and Americans for the Arts; and, working with theaters and universities around the country to mount locally specific projects based on Sojourn’s model performance/engagement process/production How To End Poverty in 90 Minutes.