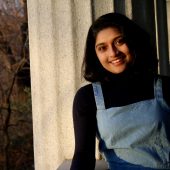 Karishma Bhagani is a fifth-generation Kenyan of Indian descent, born and bred in Mombasa. Her ancestors migrated because of the British Raj, on dhows from Gujarat to East Africa, to seek greener pastures. Karishma was born in a “self-made” family: her father is a small-scale transporter, and her mother is a businesswoman. As a child, she was set on becoming a human rights lawyer and changing the world. It was not until eighth grade, when she directed a Kiswahili-themed production of A Midsummer Night’s Dream, that she realized the power of theatre to shift mindsets and build stronger communities. Karishma committed to making the arts the center of her education, creating a platform for creative expression. She is the only one in her family, and the first student from her school, to study theatre at a university. Her work explores the use of performance as a tool for political mobilization and defining identity in post-colonial Africa. Karishma is dedicated to supporting “glocal” art and elevating untold African stories. Karishma has degrees in Theatre and History from NYU. She serves as Associate Artistic Director for the Tebere Arts Foundation in Uganda and Associate Producer for the Nairobi Musical Theatre Initiative.