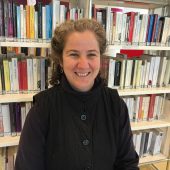 Maya E. Roth fills the Della Rosa Distinguished Professor at Georgetown, where she stewarded the development of the Theater & Performance Studies Program and was founding Artistic Director of the Davis Performing Arts Center. As scholar and artist, she brings expertise on cross-cultural adaptations of classics, feminist drama, and diasporic civic poetics. She has published widely on the plays of British-Basque-American Playwright Timberlake Wertenbaker, whose work she has often directed. Recent other highlights include writing the Preface to Theatre of War and Exile (Palgrave 2015) and close collaboration with Iraqi-American Playwright-Performer Heather Raffo as developmental dramaturg for both Noura (workshopped at Georgetown in 2015, to premiere at Shakespeare Theatre 2018) and the libretto for Fallujah! (premiered by Vancouver City Opera). She steered adjudication and curation for the Jane Chambers Prize for feminist playwriting 2006-16. Maya is honored to have won the Dean’s Excellence in Teaching Award.