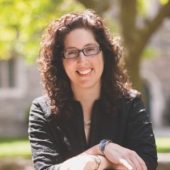 Mara Isaacs is the founder and Executive/Creative Produce for The Octopus Theatricals. Mara has produced over one hundred productions that have been seen on Broadway (Vanya and Sonia and Masha and Spike, Translations, Anna in the Tropics, Electra), off-Broadway (Hadestown,Fiasco Theater’s Into The Woods, The Brother/Sister Plays, Miss Witherspoon, Crowns, The Laramie Project), at theaters around the country and internationally. Her productions have received Tony, Obie, Drama Desk, Drama League, Lucile Lortel, New York Drama Critics and Outer Critics Circle Awards, and have appeared twelve times on American Theatre Magazine’s annual “Top 10 List of Most Frequently Produced Plays.” She served as Producing Director at McCarter Theater Center and produced new play development programs for Center Theatre Group/Mark Taper Forum. She is currently a visiting faculty member for the CalArts MFA Producing program and for Princeton University’s Lewis Center for the Arts, and serves on the boards of Tofte Lake Center and the Dramatists Legal Defense Fund.  She is a graduate of the University of California, Berkeley.