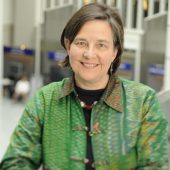 Katherine Marshall has worked for over four decades in international development, focusing on the world’s poorest countries. A senior fellow at Georgetown University’s Berkley Center for Religion, Peace and World Affairs and Professor of the Practice of Development, Religion, and Conflict in the School of Foreign Service, she is the executive director of the World Faiths Development Dialogue (WFDD), a non-governmental organization born in the World Bank. WFDD’s mission (and center of Marshall’s current work) is to bridge gulfs separating the worlds of development and religion. During a long career at the World Bank, leadership assignments focused on Africa, Latin America, and East Asia. From 2000 – 2006, she was counselor to the Bank’s president on ethics, values, and faith in development. She holds or has held various board positions including the World Bank Community Connections Fund, AVINA Americas, the Opus Prize Foundation, the International Shinto Foundation, and the International Anti-Corruption Conference Advisory Board; she served as a Trustee of Princeton University and is a member of the Council on Foreign Relations. Recent books include Global Institutions of Religion: Ancient Movers, Modern Shakers, ( Routledge 2013) and (coedited with Susan Hayward) Women, Religion, and Peacebuilding: Illuminating the Unseen (US Institute of Peace). http://explore.georgetown.edu/people/KM398/