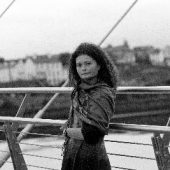 Dijana Milošević graduated at the Faculty for Special Education and Rehabilitation and at the Faculty of Dramatic Arts-Department of Theatre Directing, University of Belgrade. Ms. Milošević co-founded DAH Teatar in 1991 (which expanded into the DAH Theater Research Center in 1993), and, since the beginning, directs its performances. With this position comes the responsibility of Artistic Director for many festivals and projects that the company engages. She continues to tour with DAH Theater’s performances while offering workshops and lectures during various residencies, world- wide. She was the programmer of INFANT (INTERNATIONAL FESTIVAL OF NEW AND ALTERNATIVE THEATRE) Festival in 1999 and 2000. She was a member of BITEF (BELGRADE INTERNATIONAL THEATRE FESTIVAL) Festival Jury and was the President of the BITEF Board. As the Co-founder of several theatre networks, she holds many high positions in various organizations. She collaborates with THEATRE several peace building networks. She is also the professor at the Institute for the Modern Dance in Belgrade. She founded and co-leads a couple of educational programs within DAH Theatre Research Center – International Institute for Actors and Directors, Inside the Laboratory and Residency at DAH Theatre. She intensively collaborates with peace activists groups. She also collaborated with different artists and theatre groups as theatre director for various shows. She writes about theatre and society. www.dahteatarcentar.com