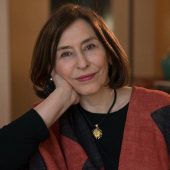 Azar Nafisi is best known as the author of the national bestseller Reading Lolita in Tehran: A Memoir in Books, which electrified its readers with a compassionate and often harrowing portrait of the Islamic revolution in Iran and how it affected one university professor and her students. Reading Lolita in Tehran has been translated in 32 languages, and has won diverse literary awards, including the Prix du Meilleur Livre Étranger, Non-fiction Book of the Year Award from Booksense, the Frederic W. Ness Book Award, the Latifeh Yarsheter Book Award, the Grand Prix des Lectrices de Elle, and an achievement award from the American Immigration Law Foundation, as well as being a finalist for the PEN/Martha Albrand Award for Memoir.  In 2006 she won a Persian Golden Lioness Award for literature, presented by the World Academy of Arts, Literature, and Media. Between 1997 and 2017, Azar Nafisi was a Fellow at the Foreign Policy Institute of Johns Hopkins University’s School of Advanced International Studies (SAIS). Her most recent book is entitled The Republic of Imagination: America in Three Books (October 2014), a powerful and passionate case for the vital role of fiction in America today.