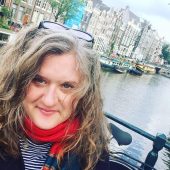 Juli Hendren is a founding member and the Artistic Director of Tricklock Company and the Curator of The Revolutions International Theatre Festival. Hendren has produced artists from over twenty different countries around the world through the festival. She is a director, writer, actor, and teacher who has taught and performed across the US, Canada, Europe, Uganda, and Colombia. Hendren was a part of the TCG delegation to Cuba in 2015 and Chile in 2017. She was the production manager for the California International Theatre Festival and the UNM/ATEC collaboration in Beijing, China. She is a graduate of UNM and has trained in physical theatre with Dell‘Arte, Open Theatre, and Double Edge Theatre, song and body work with Gardzienice of Poland, clown and buffoon with Mump and Smoop in Canada, and voice with Ukrainian singer Mariana Sadowska. She has collaborated with American playwrights Neil LaBute, Mac Wellman, and Idris Goodwin on several projects. She is a critically acclaimed solo performer and has toured the US and Europe with her solo work. She is a member of Theatre Without Borders and co-creator of the Theatre Without Borders/Revolutions Symposium. Hendren is an adjunct instructor in theatre at University of New Mexico.