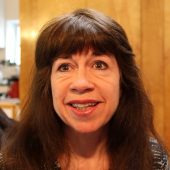 Joanna Sherman is the Artistic Director of Bond Street Theatre. As director, choreographer, musician and actor, she has participated in company performances and projects globally. The company primarily works in post-war and disadvantaged communities, collaborating with local artists, and working for the benefit of women, children and others through theatre. Current focus areas: Afghanistan, Haiti, Myanmar, and Lebanon. Ms. Sherman has directed and taught internationally, and is a frequent speaker and advocate for Theatre for Social Development. Under her directorship, the company received a MacArthur Award for its interdisciplinary programming. She has been an advocate and speaker on the role of the arts in peace building at the United Nations, National Council on Women, Association of Performing Arts Presenters, UN Conference on Women in China, universities, and other forums, and featured on CNN, BBC, NPR, Voice of America, Radio Free Europe, and published in American Theatre magazine. She is the 2014 recipient of the Lee Reynolds Award from the League of Professional Theatre Women. Ms. Sherman has a BFA from Cooper Union, and an MA in Theatre & International Studies from New York University. Ms. Sherman also plays tenor saxophone with the Shinbone Alley Stilt Band.