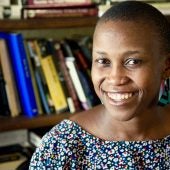 Princess Rose Zinzi Mhlongo was born in Emalahleni Mpumalanga, South Africa. She is the third of four children raised by her mother (a professional nurse) and father (a teacher) in a small mining town. In high school, she joined the community youth theatre that traveled every year to the National Arts Festival to present a show and also watched carefully selected productions that exposed the diverse culture of a post-apartheid nation. She then obtained her BA in Drama at the Tshwane University of Technology. Upon directing her debut production, Princess was named the 2012 Standard Bank Young Artist of the Year. Her career journey was documented in a 13-part documentary/reality show following her path as a young black female director. Princess’ work has toured around the world, receiving numerous nominations and awards. For seven years, she ran an independent performance space called The Plat4orm, attending to the need to develop new uncensored work in the industry. The Plat4orm develops various projects for social change as a non-profit company, using the arts as a tool of communication. Currently, Princess serves as part of a research team of African creatives formed by The Goethe Institute, mapping cultural practices that develop through migration and mobility in North and Southern Africa.