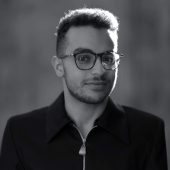 Adam Ashraf Elsayigh was born in Cairo, Egypt to parents who were reluctantly doctors. When his parents moved to Dubai, Adam grew up in a religious Muslim household with American cable television, going to a British school in a Gulf state where over 90% of the population were migrant workers. This postcolonial reality made Adam aware of global inequity and political repression from a young age. He discovered theatre at the age of twelve when his father took him to a performance of King Lear on a trip to Cairo. That summer, Adam tried (and failed) to read Shakespeare’s collective works. Instead, he wrote his first screenplay. Adam honed his craft as a storyteller while earning his BA in Theater as an undergraduate at NYU Abu Dhabi. For his thesis project, Adam wrote Drowning in Cairo, a play about three gay men who were arrested on the Queen Boat, a gay nightclub on the Nile that was raided in 2001. Currently based in New York to pursue his PhD in Theater and Performance Studies at The Graduate Center of CUNY, Adam is a playwright, dramaturg, producer and translator, making work that interrogates themes of migration, colonialism, and queerness in the Global South. He is the Roundtables and Casting Apprentice at The Lark Center for Play Development, and is also an Associate Artist and Producer at National Queer Theater as co-founder and producer of their annual Criminal Queerness Festival.