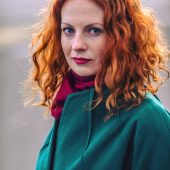 Ada Mukhina was born in what is known today as St. Petersburg, Russia, at a time when the city was Leningrad, USSR. Her family has been living in St. Petersburg for three generations, surrounded by the city’s revolutionary spirits (as a birthplace of the Russian Revolution), its historical traumas (as a city under siege for 900 days during WWII), and snobbish “cultural capital” flavor (as the center of the Silver Age of Russian culture). Now as a nomadic artist and award-winning theatre-maker, Ada carries these influences — combined with a little bit of blues caused by lack of sun and precarious living conditions — in her travel backpack. Initially, Ada studied law, human rights, and civic education. In 2012, she founded Theatre Project Vmeste, a Russian collaborative theatre group that created multiple community-based projects in theatres, museums, educational, and human rights organizations with non-actors. In 2015, she earned an MA with distinction (Performing Arts) from the Russian State Institute of Performing Arts, followed by a second MA with distinction (Advanced Theatre Practice) in 2018 from London’s Royal Central School of Speech and Drama. Her artistic practices include directing, performing, curating, writing, teaching, and researching. Ada’s politically and socially engaged documentary and participatory theatre work has been presented in the UK, Germany, the Netherlands, South Africa, the US, and Russia. She is online at www.adamukhina.com.