National Theatre of Ghana’s Ten Blocks on the Camino Real 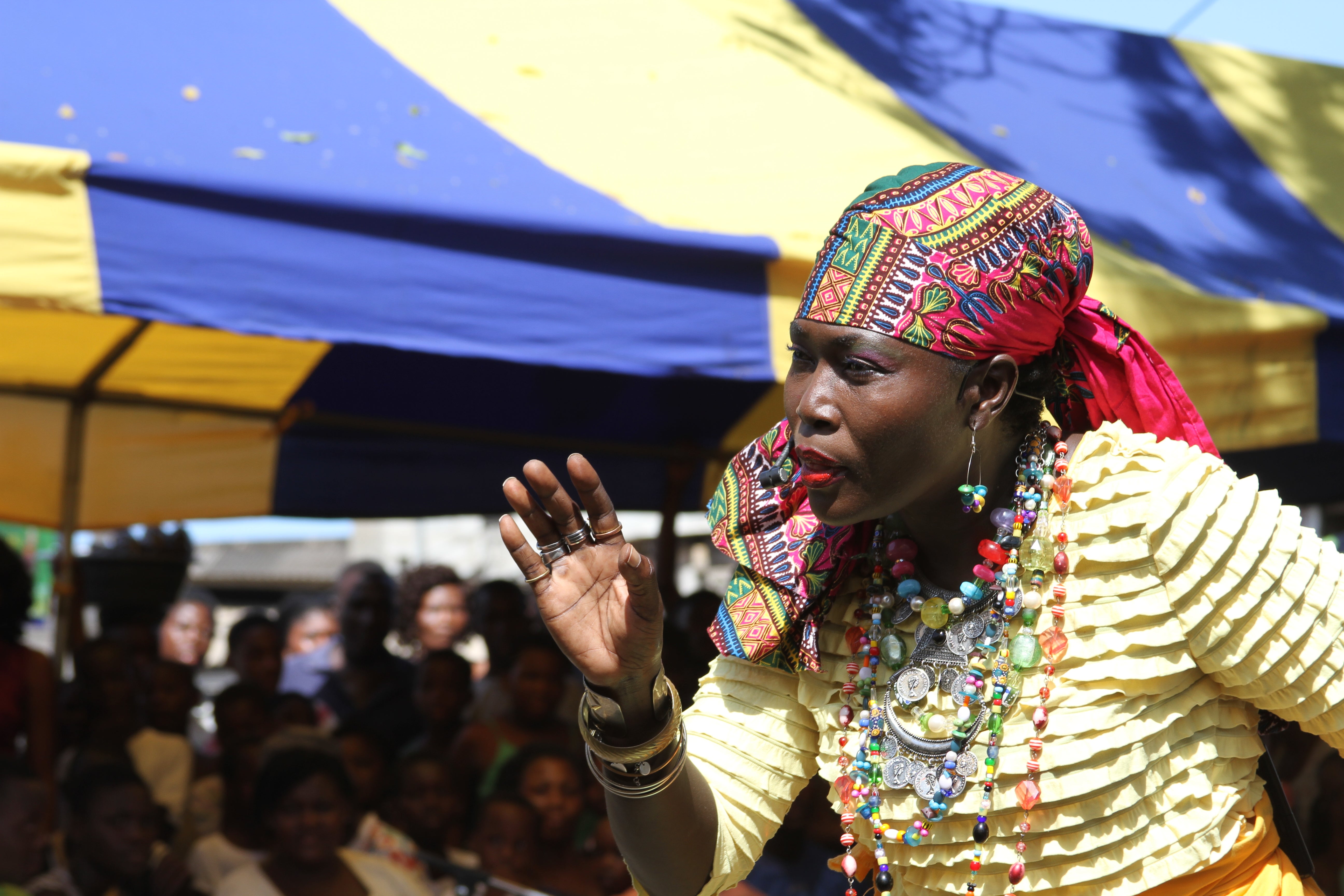 National Theatre of Ghana’s Ten Blocks on the Camino Real

Abibigromma, the resident troupe of the National Theatre of Ghana, was in residence in Washington, DC for three days only for an outdoor marketplace production of Ten Blocks on the Camino Real by Tennessee Williams.

Written by American playwright Williams in 1947, Ten Blocks related in songs, dialogue, and dance how the American hero Kilroy maintains his open heart in a grasping world, even after death. This production, performed in English, took a West African perspective on Williams’ classic story of love and heroism, weaving in vibrant music and presented in an experiential marketplace setting that highlights the themes of political economy and social stratification at the heart of the play.

The production premiered in marketplaces and outdoor venues in Accra in 2016, and continues to tour throughout Ghana. 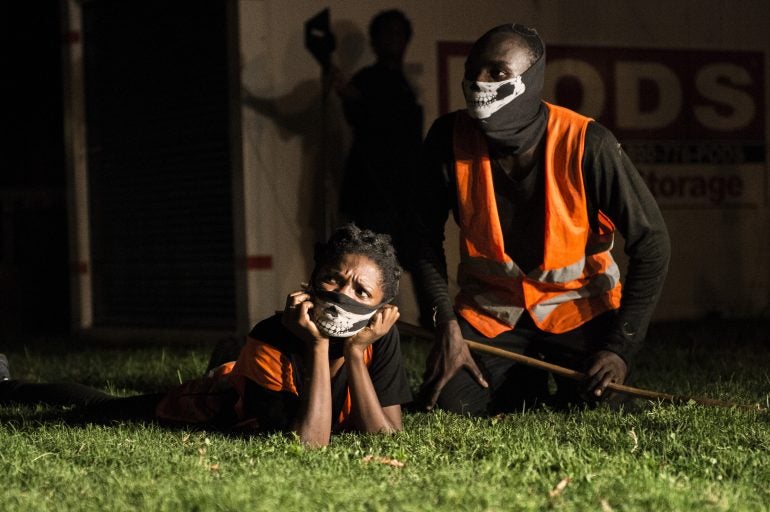 Mabel Ocloo and Eldad Wontumi as the Street Cleaners in Ten Blocks at the National Building Museum as part of their Washington, DC residency. (Teresa Castracane Photography)

The DC performances were part of its multi-city tour, produced by the Provincetown Tennessee Williams Theater Festival. 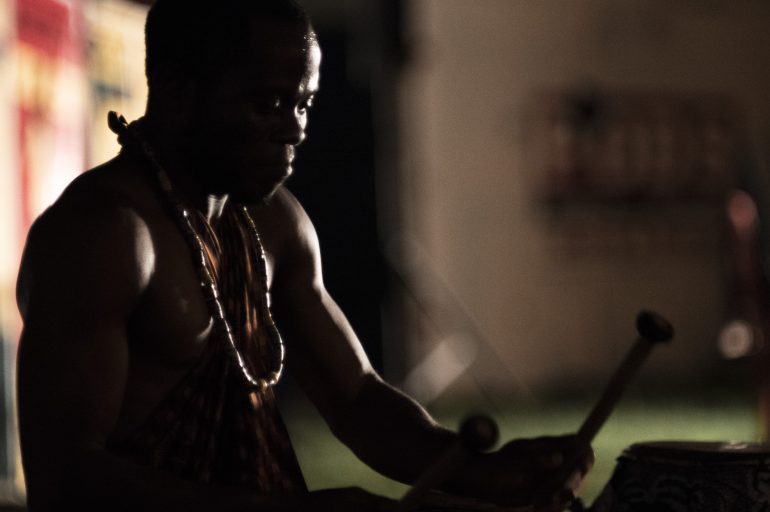 Godwin Awador performs as the drummer in Ten Blocks at the National Building Museum as part of the Washington, DC residency. (Teresa Castracane Photography)

The DC performances of Ten Blocks on the Camino Real were produced in partnership with the Shakespeare Theatre Company, Montgomery College’s Art Institute, and GU’s Theater and Performance Studies Program, African Studies Program, Office of the Provost, Mortara Center for International Studies, the Department of English, and Culture and Politics Major in the School of Foreign Service. Ten Blocks on the Camino Real was part of a multi-city U.S. tour, produced by the Provincetown Tennessee Williams Theater Festival in partnership with The Lab, the Tennessee Williams Festival St. Louis, the University of Michigan in Detroit and Ann Arbor, and Clark University in Worcester, Massachusetts. 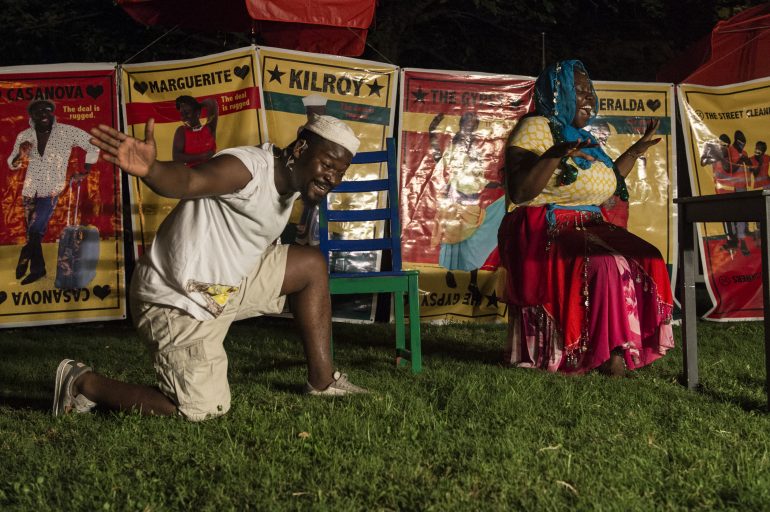 Isaac Fiagbor as Kilroy and Joycelyn Delali as Esmeralda in Ten Blocks at the National Building Museum as part of the Washington, DC residency. (Teresa Castracane Photography)

David Kaplan, Provincetown Tennessee Williams Theater Festival Curator and director of the play, connected with Abibigromma and visited the company in Accra for three weeks in the spring of 2016, during which time the group developed its Ten Blocks on the Camino Real and performed in marketplaces and outdoor venues around the country. Since last year, most rehearsals have been held online, via video conference.

The resulting show, Kaplan says, sits at “the crossroads of world theater. It combines commedia and Brecht with African theater traditions. From the moment rehearsals began in Ghana, we were laughing at the same jokes as actors and audiences in America and Uruguay.”

“I have so much respect for Abibigromma’s craft,” Kaplan adds. “The company has trained to travel, to perform, to teach, and to be involved in varied communities throughout Ghana, and now in America. They put into practice the power of the group. It’s been a privilege to work with them.” 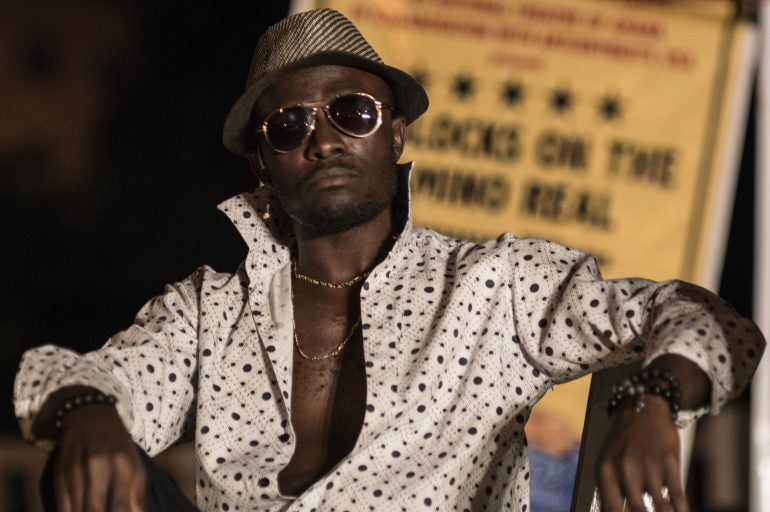 Emmanuel Ghartey as Casanova in Ten Blocks at the National Building Museum as part of the Washington, DC residency. (Teresa Castracane Photography)

Ghanaian actress Abena Takyi, who plays the courtesan Marguerite, spent much of her childhood in Manhattan and Queens, then returned to study theater and music at the University of Ghana at Legon. She joined Abibigromma last year.

“Tennessee Williams is brilliant,” she says, “and Camino Real is really a depiction of life. I’ve never played such a role before, but in this show, everyone is a star – everyone gets their shining moment.”

In the past year, she says she has grown closer to her Abibigromma friends with each successive show: “Playing together all the time gives you such good chemistry.”

When performing outside in public spaces, Takyi says, “the shyness factor has to go out the window.” There’s no room for stage fright when “we’re playing inside the audience, just like in the markets. We have a lot of interaction with them before the show, in costume, to get them to laugh and empathize with us. We get to know the type of people we’re playing for.”