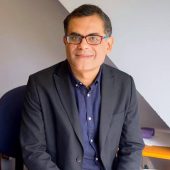 Raza Ahmad Rumi is a writer, journalist and international development practitioner from Pakistan. He teaches at Cornell Institute for Public Affairs and is a scholar in residence at Ithaca College, New York. Raza has also been visiting global faculty member at Gallatin, NYU. Currently, he is editor of the Daily Times, Pakistan. He is a fellow at Berkley Center for Religion, Peace & World Affairs, and earlier was a fellow at the National Endowment for Democracy. He is a regular columnist with South Asian newspapers. His writings have been published in Aeon Magazine, Foreign Policy, New York Times, and Huffington Post among others. He has also worked as a broadcast journalist in Pakistan where he hosted current affairs shows on Capital TV and Express News. Prior to his career in journalism, Raza worked for Asian Development Bank, the Government of Pakistan and as a policy adviser to a host of international aid agencies. His writings are archived on www.razarumi.com. He is the author of Delhi By Heart a travel memoir on India’s capital and The Fractious Path: Democratic Transition in Pakistan, (published by Harper Collins). His most recent book of essays Identity, Faith & Conflict was published by Ithaca City of Asylum in September 2016.