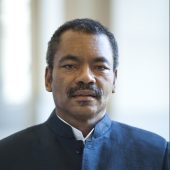 Maurice Jackson teaches History and African American Studies and is Affiliated Professor of Music (Jazz). Before academe, he worked as a longshoreman, shipyard rigger, and community organizer. He is the author of Let This Voice Be Heard: Anthony Benezet, Father of Atlantic Abolitionism, co-editor of African-Americans and the Haitian Revolution and co-editor of Quakers and their Allies in the Abolitionist Cause, 1754-1808. Jackson has won numerous fellowships and is at work on Halfway to Freedom: African Americans and the Struggle for Social Progress in Washington, D.C.  He is co-editor of a special issue on Jazz in D.C. in Washington History. He wrote the liner notes to the two jazz CDs by Charlie Haden and Hank Jones, Steal Away: Spirituals, Folks Songs and Hymns and Come Sunday. Jackson recently lectured in France, Turkey, Italy, Puerto Rico, and Qatar. A 2009 inductee into the D.C. Hall of Fame, he was appointed by the Mayor of the as the first chair of the District of Columbia Commission on African Americans (2013-2016.) He is the only faculty member to have been appointed by President Jack DeGioia to both the Slavery Working Group and the Racial Justice Working Group.