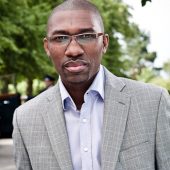 Kwame Kwei-Armah is the Artistic Director of Baltimore Center Stage where he has directed Marley, One Night in Miami, Amadeus, Dance of the holy ghosts, The Mountaintop; An Enemy of the People, The Whipping Man and Things of Dry Hours. For the Public Theatre New York: Twelfth Night, Comedy of Errors, Much Ado About Nothing, Detroit ’67 (World Premiere). Kwame was Artistic Director for the Festival of Black Arts and Culture, Senegal. 2010. He conceived and directed the opening ceremony at Senghor National Stadium. Among his works as playwright are Marley, Beneatha’s Place, (Baltimore Center Stage) Elmina’s Kitchen, Fix Up, Statement of Regret(National Theatre), Let There Be Love, Seize the Day (Tricycle Theatre). He is an Associate Director of The Donmar Warehouse, has served on the boards of The National Theatre, The Tricycle Theatre, and T.C.G. Kwame was the Chancellor of the University of the Arts London (2010-15), and in 2012 was awarded an OBE for services to drama.