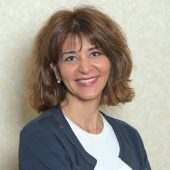 Honey Al Sayed is an award-winning independent media expert and entrepreneur with more than 20 years of experience in the Middle East, North Africa, Europe, and the United States. An accomplished, bilingual professional, Honey brings a wealth of expertise in radio communications, people management, marketing, public relations, media, art, culture, public speaking, coaching, and training. After breaking new ground in Syria’s media scene with the #1 rated morning show “Good Morning Syria” for 6 years with 7 million listeners, Honey co-founded an online radio called SouriaLi that reached 500,000 listeners in Syria and in the diaspora. She went on to found a boutique creative consultancy firm called Honey&.

Honey founded MAP – Media and Arts for Peace – a company that gets to the heart of conflict. Honey shares this experience with the next generation through a course at Georgetown University School of Foreign Service, as well as through an online course she developed for the Geneva Centre for Security Policy (GCSP) and the U.S. Institute of Peace. Regularly invited as a keynote speaker and commentator on women’s empowerment and the role of media in social change, Honey has appeared at the UN General Assembly, United Nations Foundation, GCSP, U.S. National Press Corps, Foreign Service Institute, U.S. Institute of Peace, among many others. Honey is an Associate Fellow at the GCSP and she holds a Master of Arts in International Affairs from the Fletcher School of Law and Diplomacy, Tufts University and a Bachelor of Science in Communication Media from the Lebanese American University.