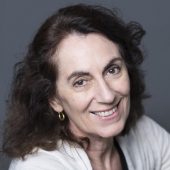 Christine Evans’ award-winning plays have been produced in Australia, the US and the UK. She has produced plays for the American Repertory Theater, the Garage Theater, Playbox Theatre, Charing Cross Theatre, Perishable Theatre, Darwin Theatre Company, Belvoir St. Theatre, Vitalstatistix, and the Adelaide International Festival of the Arts.

Her plays are published by Samuel French, Smith and Kraus, NoPassport Press and in THEATRE FORUM.

Honors include a Bogliasco Foundation Fellowship, an Australia Council for the Arts Creative Development Award, an Australian Fulbright Award, an International Collaboration grant from Georgetown, and residency fellowships at multiple artist colonies.

Evans served as Briggs-Copeland Lecturer at Harvard University, where she inaugurated the now-annual Harvard Playwrights’ Festival with Gideon Lester. She joined the Georgetown Department of Performing Arts faculty in 2012.