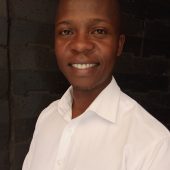 Lloyd Nyikadzino was born in the Makoni clan within Zimbabwe’s Nyati tribe. He was raised between the high-density suburb of Highfields and the other half, in the rural areas of Mhondoro. Growing up, he was never exposed to the performing arts, but imagined his future as a soldier. It was only in his sophomore year of high school that he fell in love with theatre. Upon graduating from high school, confronted with the absence of formal theatre training programs outside universities, he taught himself the tools of the trade. Through determination in the face of disapproval from his father in following theatre as a profession, he pursued professional theatre training at the University of Zimbabwe and Dell’Arte International School of Physical Theatre. He has successfully initiated theatre training programs for various disadvantaged groups and worked on a range of theatre for development projects. He is the founder of the Zimbabwe Theatre Academy and Mitambo International Theatre Festival, as well as being the cultural expert on the board of the Zimbabwe-German Society and coordinator for the Zimbabwe Centre of the International Theatre Institute. Lloyd continues to work in theatre as a mentor, award-winning director, educator, and producer.