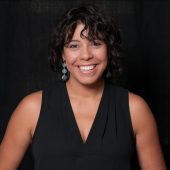 Jasmin Cardenas was born in a working-class neighborhood in Chicago to Colombian parents who immigrated to America in search of a better life. Being a first-generation American caught between two cultures, Jasmin is always trying to bridge the divide. First in her familia to graduate college she studied Theatre and began acting on stage and screen, as well as telling stories bilingually. Harnessing the power of art in action, she works in communities caught at the intersection of poverty and violence. She studied Theatre of the Oppressed with founder Augusto Boal and his son Julian, a powerful tool for collective action, critical thinking, solution-finding, and healing. Jasmin helped create Ambassadors for a United Lawndale and co-led a coalition of their black and Latino youth to Veracruz to perform and learn about the African presence in Mexico. In 2011, she performed her solo show ¿Niña Buena?…the joys and challenges of being Latina y Americana at Links Hall and toured it to the Susana Alexander International Theater Festival in Puebla, Mexico. She continues opening lines of communication between communities of difference using devised theatre. Jasmin served on the board of the international organization Pedagogy and Theatre of the Oppressed. In 2018, she was awarded The Catalyst Initiative by The Center for Performance and Civic Practice to support her current work — of devising theatre to fight for workers’ rights — with the Chicago Workers Collaborative and the newly formed Workers Resistance Theater.