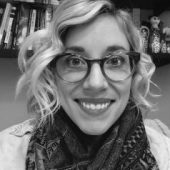 Jamie Gahlon is a cultural organizer, producer, and theatremaker. She is the Senior Creative Producer and a Co-Founder of HowlRound, a knowledge commons by and for the theatre community based at Emerson College in Boston. She manages the HowlRound day-to-day operations, and is a co-creator of the World Theatre Map, co-administers The Andrew W. Mellon Foundation’s National Playwright Residency Program, and regularly produces theatre convenings around urgent field-wide issues. Prior to her work at HowlRound, Jamie co-launched the American Voices New Play Institute at Arena Stage, where she worked for five years. She also worked prior for New York Stage & Film, and the New Victory Theatre. She is a proud member of the Latinx Theatre Commons Steering Committee and the Committee of the Jubilee. Jamie holds a Bachelor of Science in Foreign Service with a focus on Culture & Politics from Georgetown University.