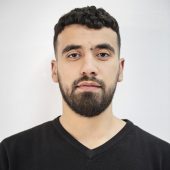 Faisal Abu Alhayjaa, the youngest of ten, was born in the Jenin Refugee Camp in Palestine. Faisal realized his passion for theater after watching the documentary Arna’s Children, directed by Juliano Mer-Khamis. When Juliano opened an acting school as part of the Freedom Theatre in Jenin Refugee Camp, Faisal became one of the first students to join. After graduating, he served a resident artist in Freedom Theatre for the next five years and taught the next generation of acting school students. In 2012, he joined Red Noses International as a clown to bring laughter into children’s hospitals across the West Bank where he found and experienced the power of laughter. In 2018, Faisal toured the UK performing Showtime from the Frontline with comedians Mark Thomas and Alaa Shehada.